Financial Demands of the Digital Age 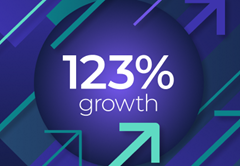 In February 2022, Orbus Software surveyed 1,000 IT decision-makers across the UK and the US to determine the extent they are affected by technical debt.

The survey revealed that the pandemic had a strong effect on the rising numbers of technical debt, with four in five IT decision-makers saying that spending on technology has increased since the start of the pandemic in March 2020. 71% claim that the increase is due to a rising number of employees practicing hybrid and remote working, followed by 69% seeing an increase due to rising technology costs.

The survey also found that most decision-makers aim to plan ahead, with eight in ten claiming their technology purchases were pre-planned, and 45% stating they wish to fix both short and long-term issues with new technologies. The large majority of decision-makers, an impressive 95%, have a technology roadmap in place to help make informed technology purchases. These most commonly last for the next six (26%) or twelve months (37%). Meanwhile, 14% have an 18-month roadmap in place and 19% have one for two years or even longer.

Alongside this, a significant four-fifths of decision-makers either have - or are planning to - onboard an Enterprise Architecture (EA) tool to plan future technology purchases. 87% of US decision-makers and 74% in the UK are already making plans to onboard an EA tool.

Four in five have seen an increase in tech spend

Over four in five (85%) IT decision-makers say that their companies' spend on technology has increased since the beginning of the pandemic, rising by 42.5% on average. Though 12% say this has increased by over 75%.

The large majority (95%) have a technology roadmap in place to help make informed technology purchases with these most commonly lasting for the next six (26%) or twelve months (37%). However, 14% have an 18-month roadmap in place and 19% for two years or even longer.

The technology itself though was more likely bought on to fix a mix of both short and long-term issues (45%), with 34% saying the majority of their purchases were to solve long term issues and 19% for short-term problems.

Despite making more last-minute purchases, those in the UK are more likely to have bought technology to solve long term issues than those in the US (38% v 31%). Considering the technology that has been onboarded over the last year, half (51%) say that most of this has brought tangible value or return on investment, while just 30% say that all the tech has brought a tangible value to the company.

There is always a risk of technology drift, in which there is an increased gap between what companies are trying to do and what they actually achieve. Worryingly, three fifths (62%) of IT decision makers say they currently experience this in their organization.

Four fifths have, or plan to, onboard an EA tool

In the last 24 months, four-fifths (80%) say their company has either onboarded (34%) or has made plans to onboard (46%) an Enterprise Architecture tool to plan future technology and software purchases.

Those in the US are most likely to have bought, or made plans, to bring this onboard (87%) compared to three-quarters of those in the UK (74%).

Of this group, almost half (47%) onboarded due to rising technology costs, 46% wanted to reduce the gap between IT and business stakeholders, 41% are bringing it in due to increasing complexities and 39% say they need to gain greater visibility before moving to the cloud.

On this research, Michael D'Onofrio, CEO at Orbus Software, commented: “The past two years have undoubtedly elevated the importance of technology, yet this technology drift – where there is a growing gap between what companies are trying to do and what they actually achieve – is causing significant problems. Despite spending increasing, not even a third of organizations can state it has delivered a tangible value. We are currently in a period of significant friction, and organizations are needing to pivot frequently. Because of this, organizations need reliable core services that give them visibility, reliability, and agility. It’s vital to have a tool that can give companies visibility and insight. Without Enterprise Architecture, the challenges faced by IT teams will continue to get out of hand.”

The survey was conducted by OPINIUM in February 2022.

The study surveyed 1,000 IT decision-makers working in companies with 100+ employees across the UK and the US to determine the extent they are affected by technical debt.

OPINIUM is an award winning strategic insight agency built on the belief that in a world of uncertainty and complexity, success depends on the ability to stay on pulse of what people think, feel and do. Creative and inquisitive, we are passionate about empowering our clients to make the decisions that matter. We work with organisations to define and overcome strategic challenges – helping them to get to grips with the world in which their brands operate. We use the right approach and methodology to deliver robust insights, strategic counsel and targeted recommendations that generate change and positive outcomes.