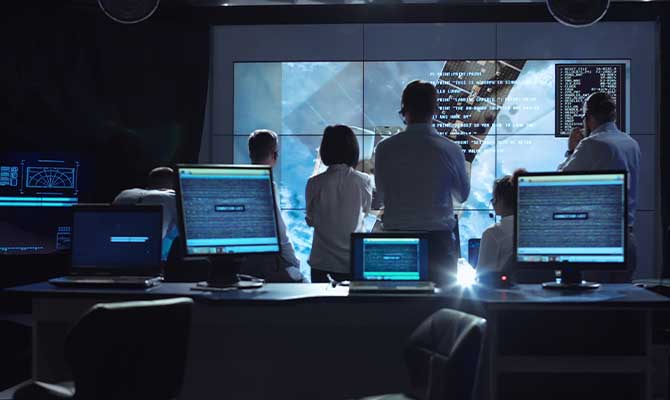 Since the 1990s, NASA has been a major partner in the collaborative effort to create the International Space Station (ISS). Now the largest man-made body in orbit, the structure can be seen from Earth using only the naked eye. The station has been continuously occupied for over twelve years, and has been visited by astronauts and cosmonauts from fifteen different nations.

When the time came to redevelop the complex training device used to train the ISS crew and flight controllers, NASA searched for a systems architecture tool that would help them to organize and develop their design. They found that not only could iServer do everything they required, it also required a minimal investment in effort because it enabled the systems engineers to use Microsoft Visio.

After more than a decade of use, NASA needed to overhaul the complex training device used to prepare the crew and flight controllers to operate the International Space Station (ISS). The device had originally been designed as a high-fidelity real-time mathematical representation of the ISS on-board systems. It simulated the orbital mechanics of the ISS, and replicated the communications that pass between the Station, the ground and other space vehicles, and even the physical interface used by the on-board crew to access the control centres. However, following a series of extensions to the space station, and as a result of general technological developments, the simulator had become outdated.

The updated version would have to be able to deliver a higher resolution simulation, and model the latest systems installed on the ISS. To deliver this requires serious computing power, and initial estimates indicated that a 64-core host computer would be needed, together with several image generators.

To complicate matters further, the upgraded device would have to be flexible, since the number of people involved in the training sessions can range from one instructor with one student, to a full team comprising several crew members, a dozen flight controllers, and several instructors. Also, because the new ISS training device would still have to connect to legacy systems, it would have to retain and support the external interfaces on the old simulator.

The iServer suite is made up of several products, including the iServer Enterprise Architect and the iServer Portal.

iServer Enterprise Architect uses Microsoft Visio as an editing tool. The NASA engineers found that, since they were already familiar with Visio, this greatly reduced the learning curve usually associated with the transition to a new modeling package. Instead of struggling with an unfamiliar interface, they were able to rapidly adapt the modeling notation to their needs, and then focus their energies on the actual design work.

iServer can be modified so that it intuitively supports a project’s notation, rather than a project being forced to misuse a predefined notation. NASA found that this freedom offered by iServer to define new relationships using correct terminology made their diagrams more consistent and easier to read.

iServer’s reporting functions also proved to be extremely useful; by enabling the details of lines drawn in Visio to be exported directly to Excel, the simple connectors could be converted into architecturally significant relationships.

Finally, the engineers found that the Portal, the read-only representation of the iServer repository, to be an extremely powerful capability, since it enabled universal viewing of the design and sophisticated searching during the review process, while its comment management functions encouraged and supported stakeholder collaboration.

While the majority of iServer customers use its familiar Visio interface to support their enterprise architecture or business process analysis efforts, iServer is flexible and can be extended to cover IT and systems architectures. This has been successfully demonstrated by NASA through their use of iServer to support the ISS training device upgrade.

While you don’t have to be a rocket scientist to use iServer, it seems that even rocket scientists appreciate the value of a simple solution which combines the accessibility of Visio with the reporting power of an enterprise modeling suite.

The designers of the original training device used the Systems Modeling Language (SysML, an extension of the Unified Modelling Language, UML) to evolve the design, but NASA did not feel that the use of a formal mark-up language was warranted for the redevelopment project.

Instead, NASA reassessed their approach, and decided that outputs they most wanted from the system architecture were decompositions of the subsystems they were building, diagrams showing data flows between the subsystems, and the deployment patterns of the subsystems required to make up each instance of the training device.

To realize the new design, the NASA engineers adopted the iServer Architecture Suite, a unique solution which harnesses the power of Microsoft Visio, and turns it into a working architecture repository. Adapting objects from the standard Archimate stencil, they constructed custom stencils and templates to suit their purposes, and used these to create more than two hundred composition, interface, sequence, and deployment diagrams.

"To reach for new heights and reveal the unknown so that what we do and learn will benefit all humankind."