A Taxonomy of IT Standards

Peter Harrad presents a comprehensive diagram to help you understand the constellation of standards that we face in the IT arena, and how they interact. The Open Group is doing some fine work to align its standards of TOGAF and ArchiMate, and I’m seeing a welcome emergence of other standards considering their touch points in new releases (e.g. Appendix E of COBIT 5 looks at touch points to ITIL, TOGAF, PRINCE and CMMI). But this movement is still in its infancy, so today I’m going to show the way I made sense of the landscape when coming into this arena.

Summary: Confronted with the constellation of standards that we face in the IT arena, it’s often hard to make sense of how they interact.  In this post I present the diagram that I have used for this purpose – it’s a useful way to understand which standards might interact with each other, and which ones might complement each other.

The approach that I took was to break the standards that exist down by two dimensions; what part of the lifecycle of a solution they touch, and what they provided. 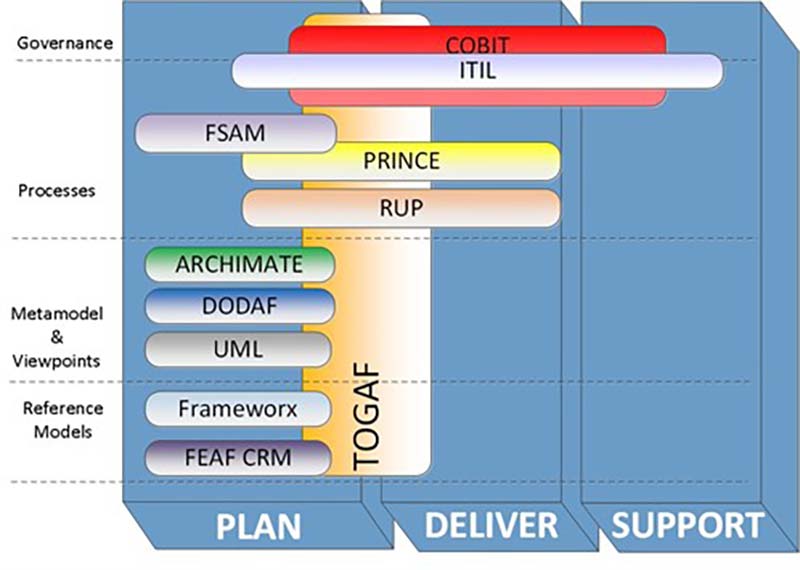 I divided the solutions lifecycle into the phases of plan, deliver and support. Here a plan could mean anything from strategic planning down to individual system design; the point being that it takes place before actual implementation work takes place.

For the dimension of what the standard offers, I chose to divide it into the following four categories:

Governance: recommendations on how to monitor and control the activity in question

Processes: recommended ways to go about the activity in question, whether high level or in providing formal process maps

Metamodel/viewpoints: what elements you use to model and what recommended views you use to communicate with different stakeholders

And then I placed the standards as boxes on this grid, showing which aspects each standard provides guidance on.

Having created this diagram, it becomes much easier to see where potential touchpoints or conflicts exist between different standards. For example, it becomes clear that you could use parts of TOGAF (such as, for example,  the Architecture Development Method) with the either of the metamodels provided in TOGAF or in ArchiMate… but you could also in theory use the ADM and the reference models of TOGAF while working with the DODAF metamodel (if you were in a defense environment).

At the same time, it becomes clear that TOGAF and ITIL have touchpoints to each other; likewise TOGAF and COBIT have clear touchpoints. But it does also raise the question of, for example, whether TOGAF can interact with the FEAF CRM; and in fact there is an Open Group webinar (imbed hyperlink: https://www2.opengroup.org/ogsys/catalog/D013 ) by Dr. John Polgreen on this very subject.

Now, it’s possible to argue with parts of this diagram; and it’s certainly possible to argue with how I’ve chosen to divide up the two dimensions. But I found that having a visual cheat sheet like this was extremely useful in making sense of where the crossovers lie between the wide range of standards that exists out there – and suggesting ideas for making them work together, until the relevant standards bodies can come up with more official solutions.