BPMN gateways are BPMN flow elements, which are used to control how sequence flows interact as they converge and diverge within a process. 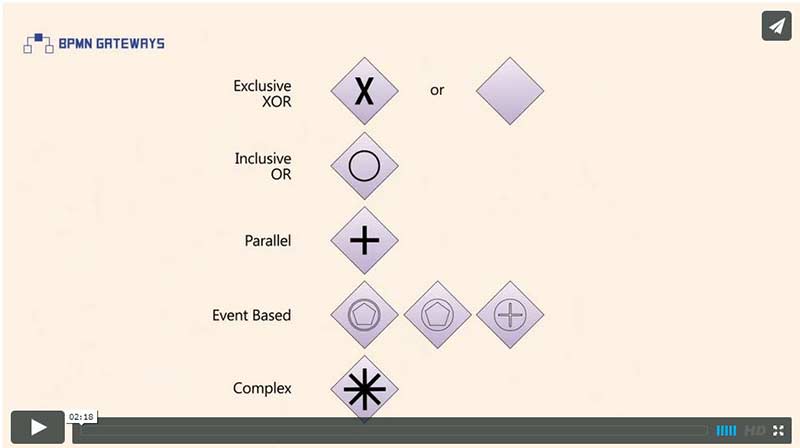 Gateways enable the implementation of branching, forking, merging, and joining of paths in a business process diagram.

In this video, we will cover the four most commonly used gateways: exclusive, inclusive, parallel and exclusive event-based gateway.

Of these, the most commonly used is the exclusive, or XOR gateway, which is used for creating alternative paths within a process flow. For example, exclusive decisions, or sequence flow looping.

Exclusive gateways can be represented as either blank or with an ‘X’ symbol within the diamond shape.

In contrast, in case of an inclusive or OR gateway all condition expressions are evaluated. Since each alternative path is considered to be independent, any combination of the outgoing paths may be taken.

A parallel or AND gateway creates parallel paths without checking any conditions. This means that each outgoing sequence flow becomes active upon the execution of a parallel gateway, which is commonly known as a “process fork”.

For incoming flows, a parallel gateway will wait for all incoming flows before triggering the flow through its outgoing sequence flows, which is known as “process join”.