IT4IT and Other Frameworks 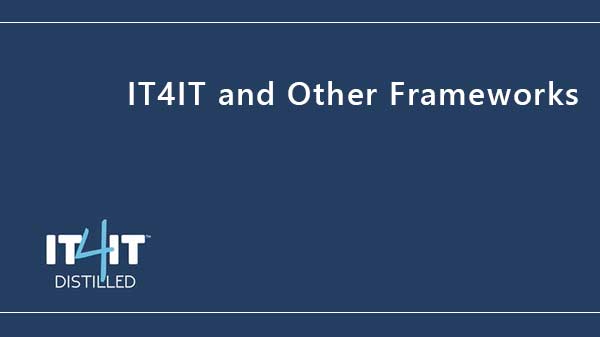 Released in October 2015, the Open Group IT4IT Reference Architecture standard is focused on defining, sourcing, consuming, and managing IT services. IT4IT does not replace anything.  It complements and enhances your current structures, and relates directly to existing frameworks.

The Open Group members have produced a practical and usable piece of work which underpins and enhances things like COBIT, ITIL, ISO, CMMI, and Agile. The IT4IT Reference Architecture has absorbed these, and extended them. So how does IT4IT relate to other standards?

Well, IT4IT is the reference architecture for the IT software ecosystem.  It describes what you would put in place to manage IT itself. So it underpins ITIL and COBIT.

TOGAF is an industry-standard architecture framework describing how you would go about introducing IT services.  So in that sense, IT4IT is one of the libraries that TOGAF recommends you develop for any area in IT that you want to manage. ArchiMate is a modeling language for business services, and is the form of language chosen by IT4IT, which is also in line with TOGAF.