In honor of Aussie Football League (AFL) finals & our love for BPMN - Orbus consultant Daron creates a "process map" to show how the finals season works!

Spring is in the air (in the southern hemisphere anyway) and with it the excitement of Australian Rules Football (AFL) finals. For those unaware of this truly great sport (the majority of the rest of the world) it's the one where grown men attempt to inflict as much bodily harm upon each other whilst trying to kick an oval-shaped ball between a couple of upright posts. Our American friends generally exclaim "these guys are crazy - they don't wear helmets or pads!" whereas our European compatriots are too busy arguing that this isn't really "football" (Australians call their version "soccer").

Anyway, in honour of true geekiness and to show off the virtues of using BPMN to convey clear meaning to your stakeholders, I have created a "process map" to show how the finals season works. To give some context to the diagram at the outset, finals happen during September and involve the 8 teams (of 18) finishing highest at the end of the regular season. The AFL has come up with some crazy rules to determine the draws (for example, 1st plays 4th and both get a second chance if they lose; 6th plays 7th in an elimination game; etc..). Teams are given second chances, a week off, or home-ground advantage depending on their final position on the ladder and how well they fare throughout the finals campaign. 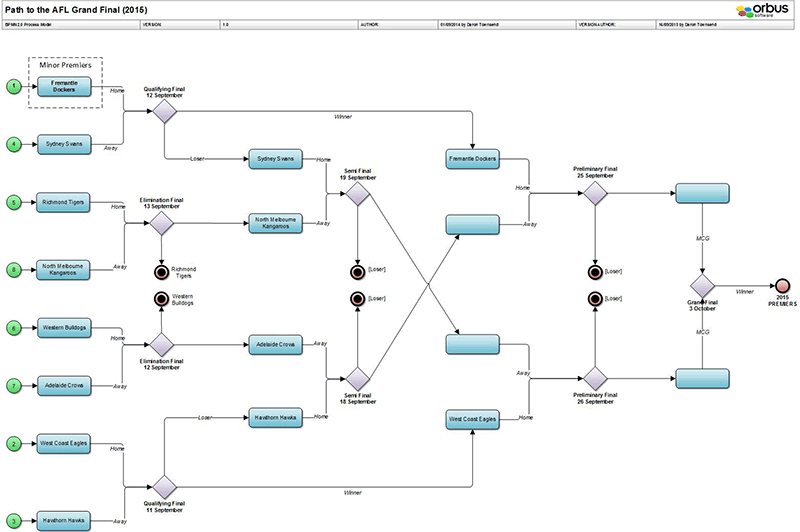 We've already played the first week of finals, so I've made a start on the diagram. Try playing along (fill in the blanks) and impressing your mates with how well you understand the path a team takes throughout the four weeks. My intention here is that I should have to do very little explaining on what the diagram represents - you should be able to work it all out from the visuals alone. If this is the case then I've done my job. If that's not the case then I have failed in my endeavours as a process modeller. It's my responsibility, not yours, to ensure I correct my model to improve your understanding. Sound familiar? If you do have feedback, feel free to add comments below.

Here's a YouTube video if you want to witness the carnage and get a better understanding of the sport: https://www.youtube.com/watch?v=XMZYZcoAcU0

Side note: As a Perth-born supporter I'm proud to say there is a chance we will have an all-Western Australian grand final this year (to be played at the MCG in Melbourne - which should be familiar to cricket fans). Go Dockers!