A sub-process is a compounded activity that represents work that, unlike a task, can be broken down to a finer level of process model detail. 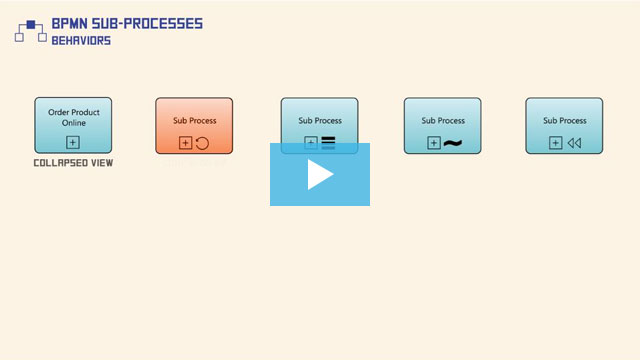 Additionally, a sub-process can be represented in an expanded or collapsed view. An expanded view shows sub-process’ details within the view of the process that it is contained in.

While a collapsed view indicates that a sub-process can be “opened up” to show a lower-level process. A collapsed-view sub-process is indicated by an additional ‘plus’ sign positioned at the bottom center of the shape.

Beside the “collapsed-view” sub-process marker, BPMN specifies four types of standard markers for sub-processes, which define different behaviors of a sub-process: a loop marker, a multi-instance marker, an ad-hoc marker, and a compensation marker.

A “multiple instance” marker, attached to a sub-process, represents several instances of the same sub-process.

A sub-process may have one to three of these “behavior” markers, in all combinations, except for loop and multi-instance which be shown at the same time.